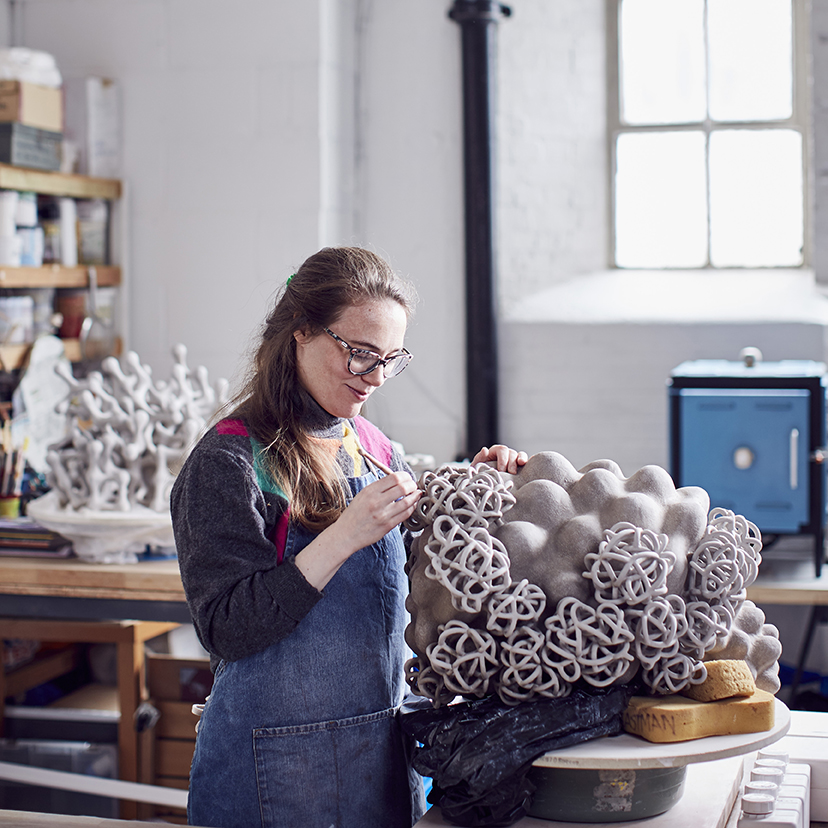 Tessa Eastman is an award-winning artist with over twenty years’ of experience working with clay and glaze. Her dynamic sculpture sits at the vanguard of the contemporary ceramic art scene, offering originality, skill and a daring approach to the art form. Eastman’s meticulously hand-built Cloud Bundles and complex Crystalline Formations appear curiously alive with movement and have found a following among collectors, gallerists and ceramophiles alike. Work has been presented by the financial firms Abacus (2003), Gresham (2006) and Clifford Chance (2019). She won the Craft Emergency Award (2016). Notable solo shows include ‘Cloudspotting’ with Jason Jacques, NYC and ‘Le désordre en délice de l’imagination’ with Galerie de l’Ancienne Poste, France (2019). Her work has been selected for the British Ceramics Biennial (2015) and she received an honourable mention at the Korean Gyeonggi Ceramic Biennale (2017). She holds a MA from the Royal College of Art (2015).

“The strange otherworldliness of natural phenomena transports me away from the mundane and I become excited when fixed ceramic form seems alive, evoking awareness of life’s transience.”

It is through sensitivity to form and surface that sculptures become animated. Colour is achieved through in-depth glaze enquiry. The glazed surface awakens gratification of the physical senses and Eastman selects hues and surfaces for their blending and clashing qualities. Her expressive use of glaze enhances the harmony and discord of the sculptural form. The arousing and soothing qualities of the surfaces reflect the fluidity of human sensations. Each glaze is made up of a recipe of mineral constituents. There are vast variations, and accidents can provide for exciting effects. Eastman’s glazes are purposely intended to transform in accidental ways. Many depend on ingredients with a tiny particle size, reducing movement and encouraging shrinkage. Texture is achieved by materials which produce chemical reactions and layering will produce a smooth or moon-like surface. Colours alter when oxides are added and her recipes inspire and assist with the further advancement of work.