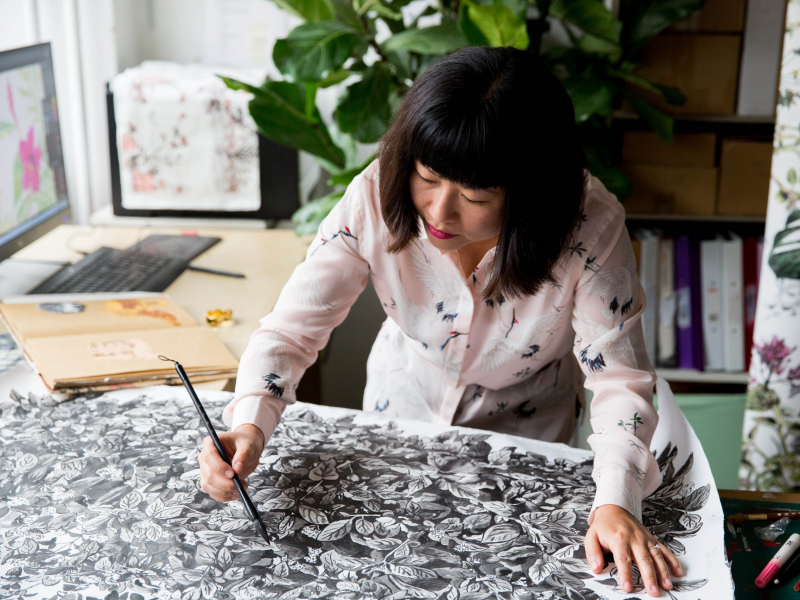 Sian Zeng is an award-winning wallpaper design studio, known for its hand-painted illustrations and modern fusion of Oriental and Western aesthetics.

Every Sian Zeng wallpaper is reproduced from large-scale original artwork and printed in the most authentic way, in order to preserve every brushstroke.

Since launching their first collection in 2009, Sian Zeng products have won the Grand Prize in the Global Etsy Design Awards and the Young Designer of the Year award from Elle Decoration. Additional press coverage includes the Sunday Times and Architectural Digest.

“I explore the possibilities of cutting-edge technologies alongside traditional techniques to create an exciting, storybook collection of wallpapers and wall stickers.”

Born in China, Sian Zeng spent her formative years in Hungary, eventually moving to the UK where she studied at Central Saint Martins.

The course was Textile Design, within which she was encouraged to experiment with whichever medium she wanted to. As part of her degree, she designed a magnetic wallpaper, which later won Grand Prize in the Etsy Global Design Awards 2019.

Sian has a keen interest in exploring new materials and tools for mark making (and an inclination to visit art and stationery shops everywhere she travels). From her London studio, Sian and her team continue to experiment with cutting-edge technologies alongside traditional techniques, creating charming wallpapers and wall decorations for modern interiors.

Learning how to write Chinese characters at an early age has influenced the way she thinks about brush strokes, moving fluidly between thick and thin lines. One of the brand’s most successful collections, Hua Trees, was painted in Chinese inks. Sian’s Fish Wallp